Due to a very manic week I don’t have a proper entry – although this may change during the workshop tomorrow – and so I’m posting a little bit of back story to The Woodsman that has most likely been dropped for pace reasons. Hopefully it’s enjoyable.

If you missed out on my random drabble from earlier in the week it’s here.

The pain in her head seemed to crush through her as if the tree had shattered her like an egg, her skull spilling its yoke all over the forest floor. And yet she was still aware so it couldn’t have, could it?

There was light all around and then the levels dropped, her vision returning through a kaleidoscope of nausea though she still couldn’t move. She was in a large stone chamber, actually suspended – it seemed – from the ceiling looking down. For a moment she thought she was back in Golgotha, that she had died but then she saw a familiar dais, the stone podium looking out at row upon row of stone benches and the dreaded channels cut in the rock of the dais.

Figures entered. One, two, three: Two men and a child. One of the adults was clearly Kurah and someone of importance from his purple robes, one was wrapped in a thick coat but was far taller than should have been possible and the child looked as if something vital had been torn from him; his eyes dull and listless.

“So,” said the Kurah. “You had something to show me. Presumably something beyond this slave?”

“I did,” came the voice from the hood. Anya thought it would be sibilant. It should have been. Instead it was a throbbing low tone that Anya recognised in the pit of her stomach. But it couldn’t be. And yet it was the Hunter.

The Hunter threw back his robe to reveal his wild locks and his weathered, rune ruined face; scarred with markings Anya could not read that he’d cut into his flesh. He raised his hand at the Dais speaking in a guttural language that was barely above grunts and shrieks. The child shrank back but the Kurah caught him by the scruff of the neck.

The words seemed to hang on the dais rather than bouncing back, seemed to fall on something, giving it shape. And the longer it went on the worse it got. A head, crude shoulders, a rolling waist, blocky legs and fists that could crush skulls until there was another figure in the room. It was man shaped. But not man. It was a creature of stone, not hewn of stone but something that’s flesh was stone, blocky and ponderous. Not organic but not manufactured.

Though Anya was from the clans and not Kurah she recognised the creature from drawings. It was the stone god; the god of the Kurah; and it was shivering – really shivering – rubbing sand off itself as it tried to get warm.

The god was sat down and when it saw the watchers it froze; then seeing the child stretched out a hand that looked like a rockslide. The creature looked desperately at the child, its hand clawing for it, pleading noises sliding from its throat. The child struggled to run but was held firm.

Anya never forgot what happened next.

The Hunter grinned at the child who shrieked as if the man was tearing him in two. The Hunter leapt. Not at the child but at the stone god. High and fast. Landing on its chest with a hefty crunch as the stone splintered and fragmented, tearing the head from its shoulders as he did so.

Then – staring at the Kurah – he crushed the head between his hands until all that remained were two eyes, rubies really. These he swallowed.

“Now you’re my weapon,” said the Kurah. “That child is to be set free, to tell all he meets.”

“That’s not enough,” said the Hunter. “You know the price, you agreed the price.”

As they left the Hunter looked directly at Anya; his eyes flooding the room with light once more as she became aware her mouth was full of mud, the faint cries and clash of steel ringing her return to the real world.

Marking a year of Flashing from Neil. 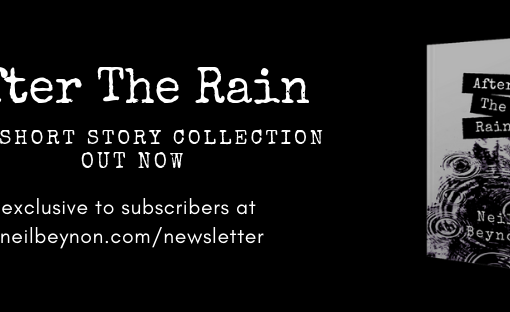